The 4 Fun In 1 unit came with bootlegs of two bottom of the screen shooters of Centipede and Galaxian, as well as bootlegs of Scramble and Pac-Man. All games had changes in graphics, sounds, and some play mechanics.

After one or more credits had been deposited into the machine, players either pressed one of the player start buttons to start a game or pressed the fire button to cycle through the other games.

Included bottom of the screen shootersEdit

This is a bootleg of Centipede, where players controlled a blaster confined to the bottom area of the screen. Once a game started, a centipede comprised of many segments appeared at the top of the screen, which, upon moving horizontally, once it came into contact with either a mushroom or a screen edge, would drop down a notch. If the centipede was shot in the head, the next segment behind it would become a head and it would move another notch downward. If the centipede or a segment reached the bottom of the screen and started back up, then additional segments would start appearing until the player either cleared them all out or they lost a life. Also, shooting any centipede segment would turn into a mushroom, which littered the playfield. Players would receive a bonus of any partially-shot mushroom left once they lost a blaster, as colliding with any enemy would cost the player a life and the game would end if there were no more lives in reserve.

Other dangers included a fast-moving spider that would appear in the player’s area, along with fleas, which would drop down from the top of the screen and leave behind mushrooms if there were fewer than five in the player’s area. Scorpions would also come out after a while and poison mushrooms; if a centipede/segment touched a mushroom, then that segment would immediately make a direct descent to the bottom of the screen. In Galactic Convoy, this bootleg was given the biggest makeover of all the games in the unit, changing some of the point values. More than one flea-like enemy would appear onscreen at once (on Centipede, only one flea would appear at a time). New centipede-like segments also appeared during some waves seemingly out of the blue (perhaps a bug), plus the scorpion-like ships could appear much earlier than with Centipede as well. The graphics were also given a severe change, as the mushrooms and all enemies became sci-fi in nature, especially with the head centipede segment (along with the flea-like vehicle) becoming a ship where a pilot could be seen inside the cockpit. A point value also appeared onscreen as well, which was not in the original game.

This is a bootleg of Galaxian, where players faced a horde of aliens in a formation above their Galaxip. Aliens would start peeling away from the formation and dive-bomb the player; if an alien wasn't shot or didn't collide with the player's ship, then the alien would reappear at the top of the formation again. Being rammed by an alien or getting hit by one of its bombs would result in the player losing a reserve ship and the game would end if all ships were depleted.

Differences with this game included the color scheme, sounds (although most remained intact from the original Galaxian), the difficulty level was increased, as most aliens flew in a much wider attack arc than with Galaxian, there could be not only many more escort ships with the flagship (only two accompanied a flagship at most with Galaxian), but also several more flagships appeared after several levels were cleared (filling up almost the entire top row in the later rounds). The player’s ship was also much more responsive to the controls, moving very quickly as opposed to its original speed on Galaxian.

This is a bootleg of Pac-Man, where the player controlled a yellow creature (although it’s orange in this incarnation) who must eat all of the dots in a maze in order to make it to the next level. Four ghosts chased him; being caught by one would cost the player a life and the game would end when all lives were lost. However, Pac-Man could turn the tables on the ghosts by eating an energizer, which he would then be able to eat the monsters for a few seconds. A tunnel at the center sides of the screen also aided Pac-Man, as it could be used to escape from the ghosts (who would hesitate if they entered the tunnel). Also, a bonus prize would appear twice during a level that was worth big points if consumed before it disappeared.

Along with the usual graphics and sound changes, the basic maze was also slightly different, along with having two extra escape tunnels. In the later levels, the maze would disappear when an energizer was eaten, along with the maze walls being removed on every other level, which these levels also included an additional, vertical escape tunnel.

This is mostly a graphical bootleg of Scramble, an early scrolling shooter where players controlled a jet facing enemies over several sectors (a city, a swarm of meteors, a cavern filled with U. F. O.s, etc.). The jet fired to the right as well as dropped bombs, the latter of which were needed to bomb tanks in order to replenish the player’s constantly dwindling fuel supply. Running out of fuel or colliding with any object would cost the player a jet and the game would end when they had no more jets left in reserve.

The majority of the game play remains intact without many changes, although due to the 4 Fun In 1 cabs only having one action button, the biggest change in this game is that, when the lone fire button was pressed, the lasers and bombs would both function at the same time. Also, players could deposit more credits into the machine to continue after their game ended; this feature was not included with the original Scramble. As usual though, the graphics were changed, as the mystery bases worth a random amount of points were changed to buildings reading “HQ” (plus they were always worth 200 points this time around) and the fuel tanks resembled car gas gauges, complete with the word “GAS” on top. 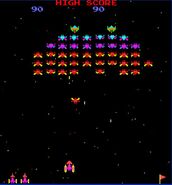 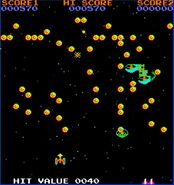 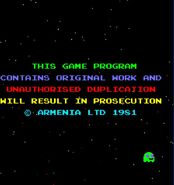 One of the warnings during the attract mode.
Add a photo to this gallery

Retrieved from "https://botss.fandom.com/wiki/4_Fun_In_1?oldid=5142"
Community content is available under CC-BY-SA unless otherwise noted.